France is drowning, not waving.

Yes, there ARE still some courageous French people, fighting for their country, for their freedoms, against a government fully submissive to Islamic terrorism financing countries like  Qatar, Saudi Arabia and the rest, while being defamed or ignored by  an "islamically correct" media.  One of them is Christine Tasin who runs Resistance Republicaine. She is one of the most courageous French women I know. Recently she received a desperate cry for help from a reader - one of many - which I translate below.

Where to take refuge in one's own country?


This could happen in Montreuil. Nights from Hell  during  Ramadan until 2 or 3 am in the district of La Noue-Clos-Français.

The code of silence and complicity or the powerlessness of the municipality, the police, the silence of the media.

This (forced) "living together".  This is a low noise civil war  which takes place in France in these neighbourhoods. And we are bound hand and foot, delivered by our elected officials and the media.

Flee, but where to? (my bolds)

Not rich enough to buy a house or a loft to be safe in the trendy neighbourhoods of the  "bobos" which are  inaccessible to the popular classes; live in one of the villages in province that are  still untouched?  but how  find work?

Is this togetherness they  impose on  us? We are despised, our suffering is dismissed as  paranoia. Just like in  the USSR under Stalinism, our unhappiness is medicalized or referred to psychiatry.


A neighbourhood given up  to extremists who impose their way of life on us by noise, by physical and verbal abuse, by  intimidation and threats, and the complicity of institutions, who, powerless, impose a  "living together" on you without giving you a choice.


Henry Laborit wrote in praise of flight, but flee where, how, with what means? Where take refuge in our own country?
We are abandoned and sacrificed.


In my darker hours I think that this little poem below is a metaphor for France:

Not Waving but Drowning

Obama and the Mullahs


I did write about Obama's Munich in my last post, but I think there is a lot of ink to flow yet over this Obama/Iran deal. I won't call it a "Faustian" deal because neither does  Obama come up to the hero of Goethe's drama nor do  the Ayatollahs reach the hoofed yet rather endearing wickedness of the German Bard's  Mephistopheles.

Since we last met there was a "Stop Iran Rally" in Times Square:


One of the speakers at this rally was former Senator Col. Allen West. I like this fiery American very much and I'd rather see him in the White House than Obama. But I disagree with him  when he comments on the famous quote from  Alexander the Great:

by suggesting that his great nation of lions is led by a sheep. I have long stopped giving Obama the benefit of the doubt and fear that America and the rest of West is led by the nose,  not by a sheep, but by a snake.

Caroline Glick, whom I can well imagine as a future Golda Meir, also spoke at that Rally and she freshened up an often used Goethe quote "Der Teufel ist im Detail" by turning it around like so:

One of my favourite writers, the brilliant Daniel Greenfield (aka Sultan Knisch) writes in his article: The Myth of Iran's Peaceful Nuclear Program:

"...The Supreme Leader of Iran already made it clear that the war will continue until America is destroyed. That may be the only common ground he has with Obama. Both America and Iran are governed by fanatics who believe that America is the source of all evil. Both believe that it needs to be destroyed.

Carter made the Islamic Revolution possible. Obama is enabling its nuclear revolution.

Today Tehran and Washington D.C. are united by a deep distrust of America, distaste for the West and a violent hatred of Israel. This deal ...[...]... is not meant to stop Iran from getting a nuclear bomb. It is meant to stop America and Israel from stopping it...." 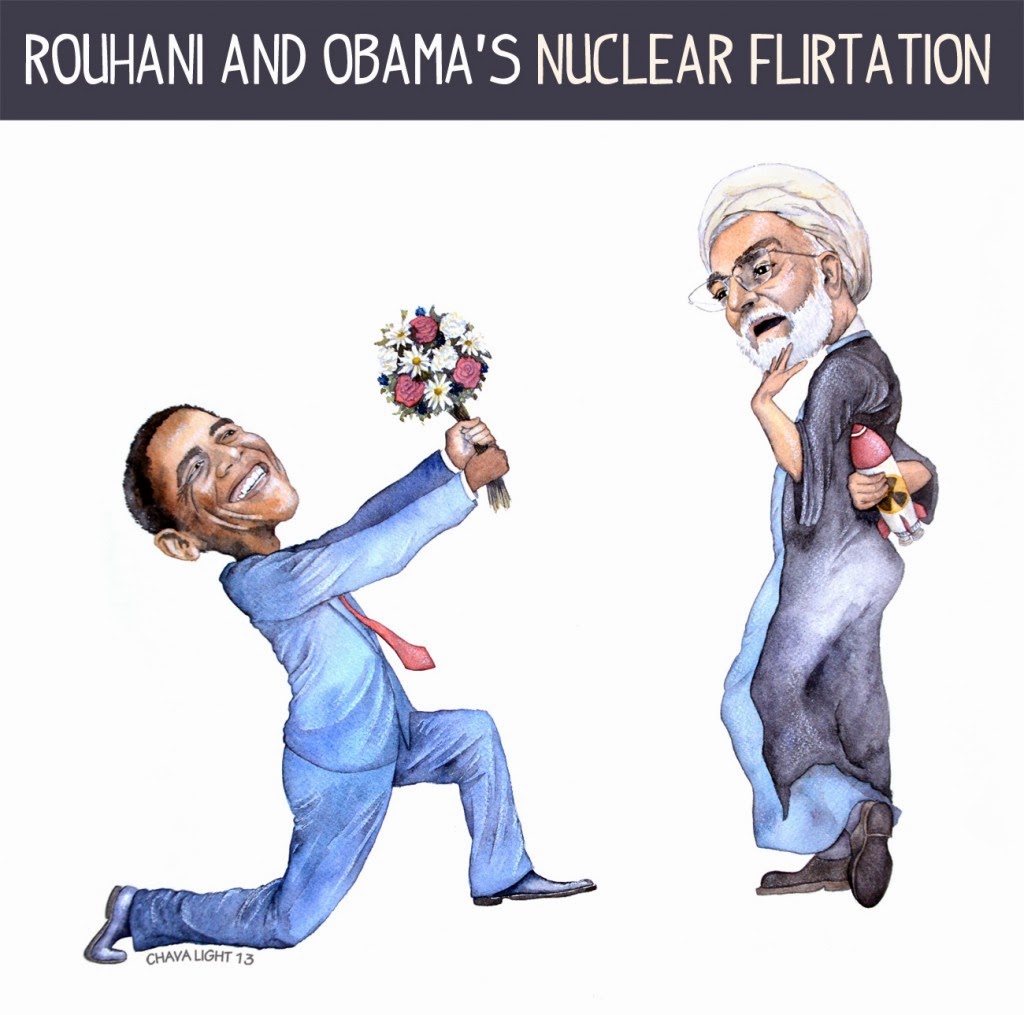 Obama and the Mullahs sitting in the tree
K-i-s-s-i-n-g!
First comes love.
Then comes marriage.
Then comes baby* in the baby carriage,
Sucking his thumb,
Wetting his pants,
Doing the hula, hula dance! 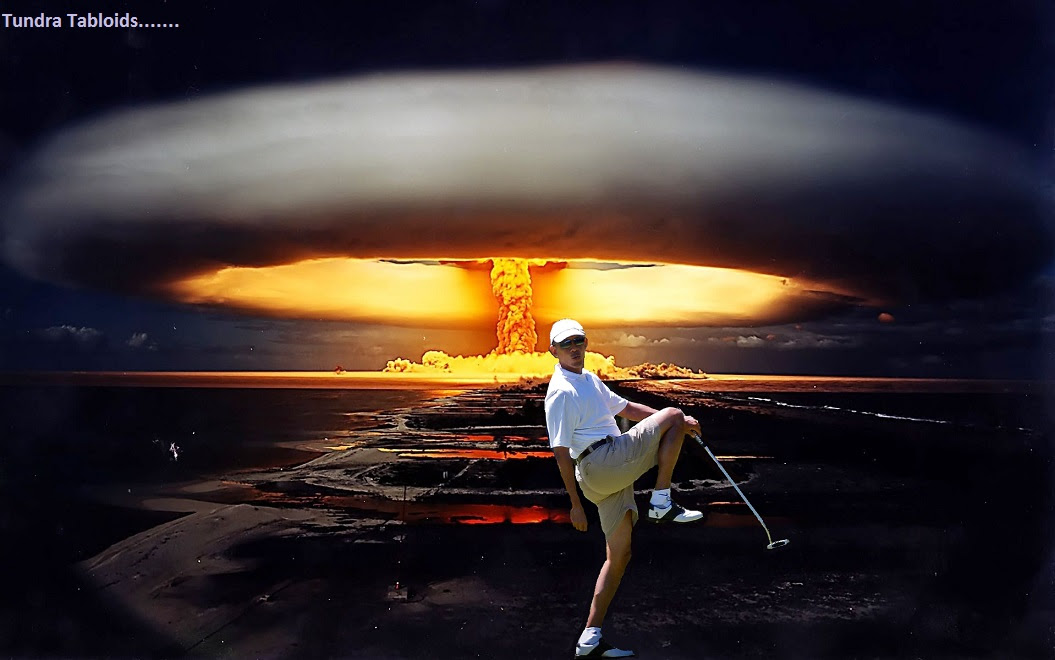 Lets quickly introduce a little note of optimism: "This will not be the end of the world" sung by Zarah Leander:


And here is the "last word" coming from the "Supreme Leader's" twitter-feed.

When people compare Obama's nuclear  "deal" with Iran's Ayatollahs to a modern day "Munich" (and the more intelligent commentators do), they refer to this:

I do believe that Chamberlain was naive.


Do I believe that Obama is naive?


While Hitler's Germany, at the time of Chamberlain, was still somewhat "in the closet", and Chamberlain could have but did not know it, Iran has for decades called openly for the annihilation of  America, Israel and the Jews (as recently as just a few days ago)  But even if I was to give Obama the benefit of the doubt and use the same excuse as  his  defenders  i.e. "He did not know", I tend to agree with the man who said:


And here is a little glimpse of the parallels I draw with that other visit to Munich, the one which the Grand Mufti of Israel   made  to Adolf né Schickelgruber:

I strongly believe that Obama does not like  Jews other than the self-loathing ones who would vote for him even  a 3rd time - and he only likes those as a means to an end. His contempt and hatred for- or envy of the Jews, which was so much in evidence by the treatment of Netanyahu and Israel during his presidency, was probably acquired during the first 7 years of his life (*), when he was being brought up  as a Muslim in Indonesia. (Both his fathers were Muslims I think).

Whether it is this dislike of Jews which  he has in common with the Ayatollahs, or a sense of obligation to pay back  the Nobel-Prize mob for their premature ejaculation of his Peace Prize, or whether it is  a combination of the  many mysterious  strings that pull him, one thing seems clear to me: he wanted Iran to get "the bomb" and he just about achieved it. In my not-so-humble opinion, Barack Hussein Obama was not so much "negotiating" on behalf of America and the West as he was campaigning on behalf of Iran.

If it is true, and I believe it is, that it was the Obama Administration who installed the Muslim Brotherhood's   Mohamed Morsi as Egypt's ruler (yes yes I knouuuwww, he was "voted" in) the new leader of Egypt,  Abdel_Fattah_el-SISI put an end to whatever Obama's plans were. So,  somewhat  dangerously for my credibility, I will speculate: perhaps, as Obama's "ambitions" (whatever they were) were  thwarted in Egypt, he tried to satisfy them with Iran, and his second attempt was dangerously more successful............at our peril.

A little trivial observation: Isn't it cute how "Sisi" is spelled "Isis" backwards. Give me Sisi any time over Isis :)

Progressives and other Wankers


Definition of "Islamophobia" by the late Christopher Hitchens: