All (Jihadist) Roads lead to Rome

"Radical" and/or "Not-So-Radical" Islam has  owned  the Left for quite  some time.  Now,  the Left  got hold of  their own  Pope,  and so it follows that Islam will own him, soon-ish-ly.

I'm tempted to say: "they can have him"; I don't like Pope Francis.

His much lauded and in-your-face "modesty" and "humility" is to jet to all the very "in" places  in the world and then to demonstratively drive (or be driven, of course) in a modest little Toyota (soooooo much more modest and small than the armada of   big armoured cars around him) to  his friends in "high places". And every member of  the 5th Column, formerly known as the "4th Estate" goes:  "awwww-how-modest-and-humble-is-this-Pope-awwww". I have even heard virulently atheist commentators calling Pope Francis:  "HOLY FATHER".

And about that speech of his to the UN: Recently I twisted a cynical cliché into:  "the last refuge of the scoundrel is 'Climate Change' formerly known as 'Global Warming' ". As a Catholic (now identifying as  an "agnostic Catholic" for the duration of this Pope) I will not go as far as calling the "holy father" a scoundrel, but I do think he is driving in the same bus as is Obama et al.

I have never liked this show-pony Pope,  from the moment of  his first public act  which was to kiss the feet of a  young muslima  even while her co-religionists were massacring the very people the Pope is supposed  to protect. Christians seem to find more protection in much maligned Israel than in the sumptuous Vatican.  Rather than sheltering prosecuted, tortured, enslaved Christians i.e. real refugees  in his palace,  Pope Francis preferred to invite a high-ranking Imam (or two?) to pray in the hallowed grounds of the  Vatican, a prayer which asked Allah to grant Muslims victory over the "unbelievers".

When in Israel, Pope Franz posed, pointedly, before this graffiti (which seemed to come straight out of the BDS book),  patiently waiting for the photographers to take as many snaps from as many angles  as possible? 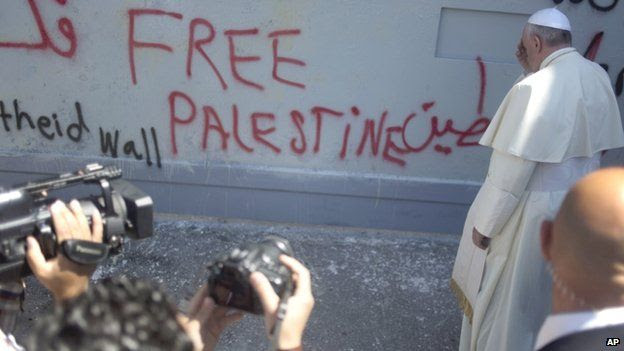 And - did he really need to emulate Obama  and  bow that deep  before the   Muslim Queen of Jordan? 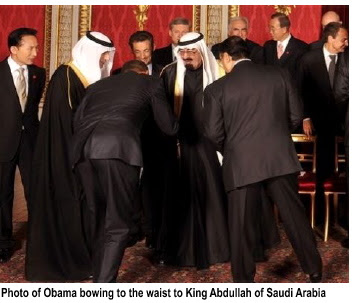 Obama and this Pope seem to be "sitting in a tree". But will al this  schmusing with Islam  save Pope Francis from the fate that the Islamic State plans for him?

Robert Spencer, one of the most erudite and courageous experts on Islam and the Islamisation of the West has already been proven (even  before 9/11) to be a present day male version of  Cassandra. Sometimes...make that "often" I feel like telling our cowardly political "leaders" like Merkel, Obama, Hollande, Cameron et al: "SHUT UP AND LISTEN to him and to Geert Wilders, and to Pamela Geller, and to so many other courageous voices, instead of so contemptuously trying to silence them.

In this interview he warns that the Islamic State "plans to behead the Pope".


Bukhari Volume 3, Book 43, Number 656 Allah’s Apostle said, “The Hour will not be established until the son of Mary (i.e. Jesus) descends amongst you as a just ruler, he will break the cross, kill the pigs Q5:60, and abolish the Jizya tax Q9:29. Money will be in abundance so that nobody will accept it (as charitable gifts).”