A Hierarchy of Victim Hood

I have never seen myself as a victim of anything else but of my own stupidity from time to time. The mantle of Victim hood always seemed quite vulgar to me. Yet, over the past 3 months or so, negotiating my way through Paris with moon boot and on crutches (due to a stress fractured ankle) I have somehow developed a sense of entitlement and when a fit looking young male wouldn’t cede me his seat de priorité in the bus, I made him.

As  he was moving away, I saw him limp and felt deeply ashamed, because by now I can move, albeit slowly, with one crutch. Getting out of that particular bus, I contortioned my face in fake pain and limped much more than I needed too, so that people would think me more entitled to that seat than I really was, I wanted to look like a victim too.

"...there is a clear pecking order of victim hood in identity politics:

Anti-American Third World national, religious and ethnic groups are at the top of the victim food chain. They out-victim everyone else.

After them come the Western victims: Racial minorities, women, homosexuals, children and animals.

Israelis, Jews, Americans, white males and rich people are the predetermined perpetrators. No matter how badly they are victimized, brave reporters will go to heroic lengths to ignore, underplay or explain away their suffering…”

Anyway, tomorrow I will throw away my crutches, ignore the seats de priorité in the buses and start taking the metro again, looooooong couloirs, steeeeeeep steps and all.
Posted by Rita at 21:32 No comments:

A pair of  Black Birds have discovered that the "Bio Muesli with 25% fruits and 4 cereales" I feed them at my window is worth singing for - and how lovely their little songs for their little suppers are !!! Perhaps their song is not quite as Joan-Sutherlandian as that of the nightingale, but give me the "Minor Poet" anytime over the universally acclaimed one:


I. The Minor Poet

His little trills and chirpings were his best.

Within his throat; but he, too, laid his breast

And then, of course, there are the pigeons. They can't sing, and they are as unpopulair in Paris as they are in Sydney, except with the very old, the lonely and the otherwise rejected. And, in Paris at least, they seem to be into "art at the bouquinistes". 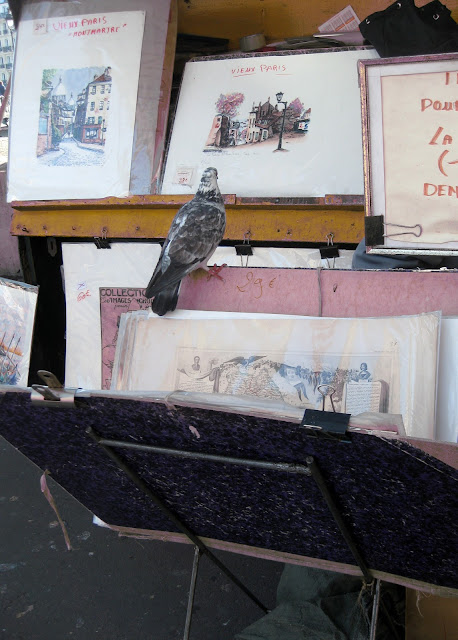 Yet another, perhaps "minor" poet. But, the sounds coming out of his seemingly clumsy instrument were just so lovely, and the walls of the bridge  gave him back an echo so beautiful, that he seemed to delight in playing and playing and playing... and I delighted in listening and listening and listening. He was no busker, and did not want money, he just played for the century old walls, and they rewarded  him (and me)  with their wondefull echo: 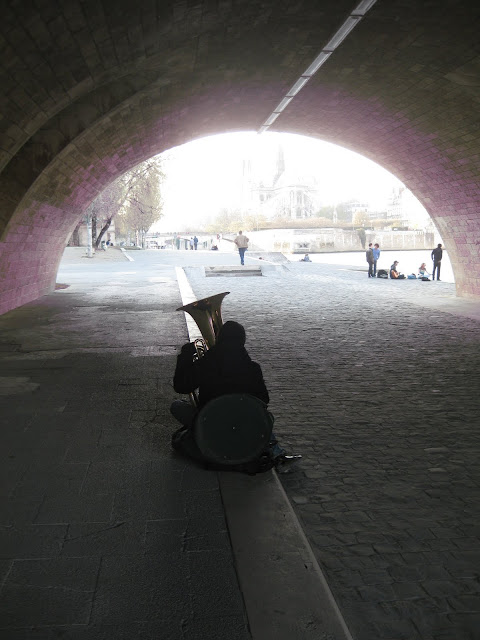 Here is a bit of tuba, by a Major Poet of the Music world to give you a little idea of  what I heard that late Paris afternoon under a bridge over the Seine:

﻿
Paris is still full of poetry and poets and both are appreciated. Here,  in a bus, right in front of my seat,  a poem by Paul Verlaine: 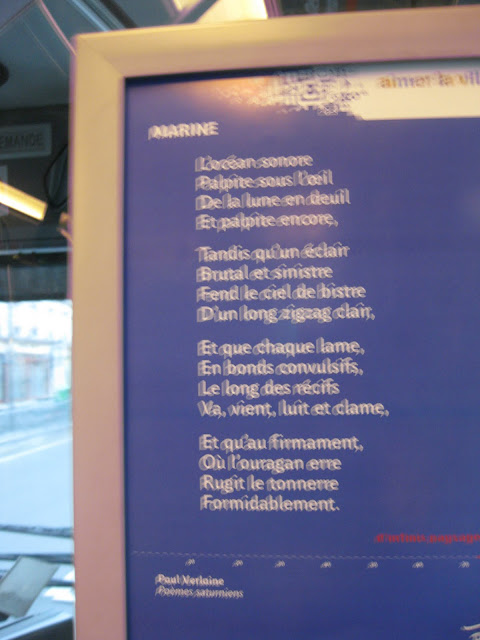 Photographed badly, because the bus was jumping, and so were we, my camera and I, but also, because I was simply flabbergasted to see a poem where anywhere else in the world they would put an ad for toothpaste/cookbooks/underwear/panadol. If you want to read it, look it up, the title is "Marine". I'm not reproducing it in the fully  readable version here, because I want to give this space to another Major poet and my favorite poem of (nearly) all times:


Qui aimes-tu le mieux, enigmatique etranger? ton pere, ta mere, ta soeur ton frere?
(whom do like best, enigmatic stranger? your father, your mother, your sister your brother?)
Je n'ai ni pere, ni mere, ni soeur, ni frere.
(I have neither father, nor mother, nor sister, nor brother)
Tes amis?
(Your friends?)
Vous vous servez la d'une parole dont le sens m'est reste jusqu'alors inconnu..
(You use a word here whose meaning I did not know until now)
Ta patrie?
(Your country?)
J'ignore sous quelle latitude elle est situee.
(I do not know under which latitude it is situated.)
La beaute?
(Beauty?)
Je l'aimerais volontiers, deesse et immortelle.
(I would like her to be Goddess and immortal)
L'or?
(Gold?)
Je le hais comme vous haissez Dieu.
(I hate it as much as you hate God)
Eh! qu'aimes-tu donc, enigmatique etranger?
(Well, what do you like you enigmatic stranger?)
J'aime les nuages... les nuages qui passent... la-bas... au fond... les merveilleux nuages!
(I love the clouds... the clouds that go by... over there... far over there... the magnificent clouds!).


I often think of this poem, when I walk along my beaches back in Australia, with their many magnificent clouds and their even more plentifull silver linings... 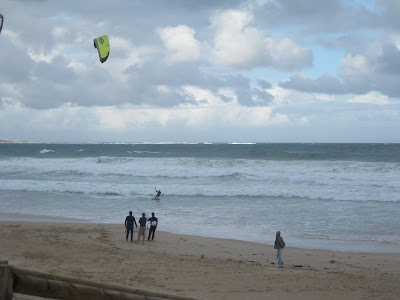 Is this one, upon whose sculpture I came just accidentally, a Minor or a Major Poet? I dont know (although I have a feeling that I should know). For whoever strew him with those beautiful roses (they were fresh and fragrant), he was certainly a Major Poet. 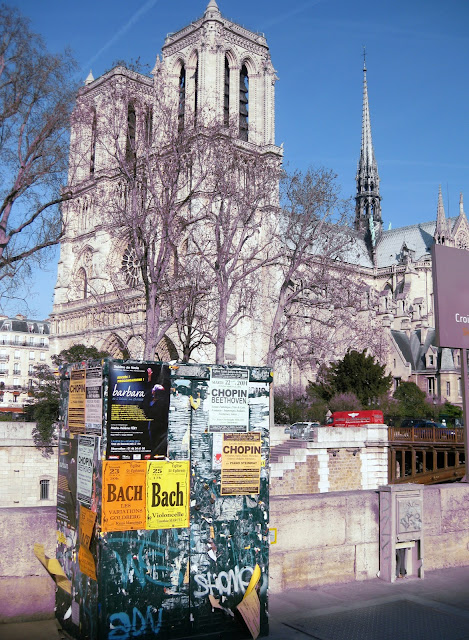 One of the weekly highlights of my Paris Winters is the Messe Grégorienne on sundays at 10 am in the Notre Dame de Paris. Identifying myself (if I have to) as a "Catholic Agnostic", I dont go there for the Holy Communion, but mainly for the music and the athmosphere, and the incense. Fantomas once answered the rhetorical question "what did Religion ever bring to humanity" with: "Music! they brought us pretty damn marvellous music!". And WOW, are those  gregorian chants,  delivered during that mass, havenly! (yes I know, "heavenly"...baboom).

I usually try to get a place right opposite of what must be the most photographed church window in the world. When one is asked during meditation classes to "go to a place you love", I usually go there, in my mind, on a sunny late afternoon, when the dustflecks dancing on the rainbow coloured light beams, really are angels dancing on a pin-heads.

This year again, I took a 1000 + 1 pictures of that window, and all turned out badly. So, as they say in TV-cooking:" here is one I prepared earlier for you"  (last year): 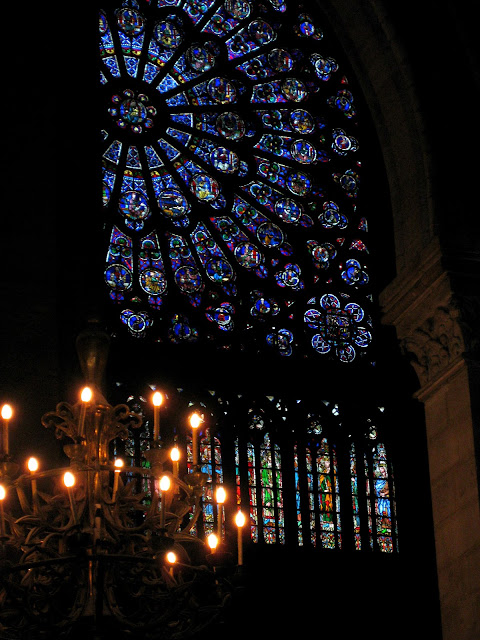 Yesterday, I observed a Nun, dressed in yesteryear's habit, who sat down and remained seated, nearly defiantly.  I thought, if anyone had the right of refusal to get up at each shake of the incense burner and down on the knees at each incantation of the Allmighty, it surely is an old nun, who is more or less the wife of Jesus and the daughter-in-law of God, quasi  family. She seemed  tired, and hurting, and rheumatic, and disappointed in life, and fed up. 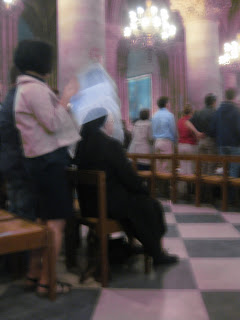 However, after they did that post-Vatican II thing I loathe, (I do not like commandeered instant mass intimacy) where you shake hands with strangers, she suddenly came to life and stood up, on somewhat shakey stumps, but assertively. I saw her shake the hand of at least 5 or 6 people to my zero.  Perhaps this was the first physical contact she had had in a loooong time.

I was brought up to consider them as something outer-wordly, and respect, even fear them as such. I had some bad experience with one nun who  frightened me as a child; now I would probably dismiss her needling nastiness with a “she needs to get laid”. Poor things - I don’t think they would even manage to engage in guilt-free masturbation. Apart from having perhaps the odd  secret crush on the visiting priest, the day-to-day earthly aspect of their lives would have to be pretty grey…or vanilla-like at best.. a life of service to a God who might or might not exist (personally I subsribe to Pascal’s wager!) they must have doubts…about Him or even Her…..these sacrificial lambs, females and males.

Outside Notre Dame, on this unseasonally hot Paris  April day (25 degrees at 11 am), the Chestnut Trees were lighting their candles, nearly as I watched and clicked away on my ageing point'n'shoot camera. 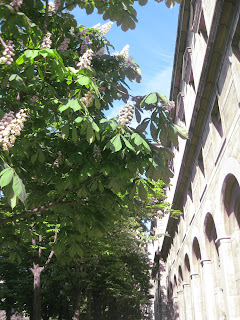 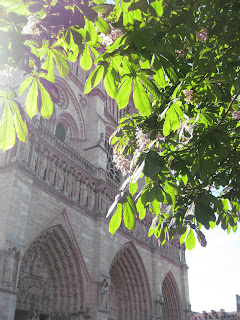