While I was not much around over the past weeks, I have, of  course, followed the movement and movements of the Yellow Vests (Gilets Jaunes) and  I have collected information/videos/articles some of which I will post in this thread after I have sorted through them. (so watch this space).  Here is  a short interview published yesterday on Boulevard Voltaire, a French online magazine (recommended if you read French), of that young Student who lost an eye.


Fiorina L.: "I feel even more yellow vest! I can't imagine all these people being hurt for nothing..." 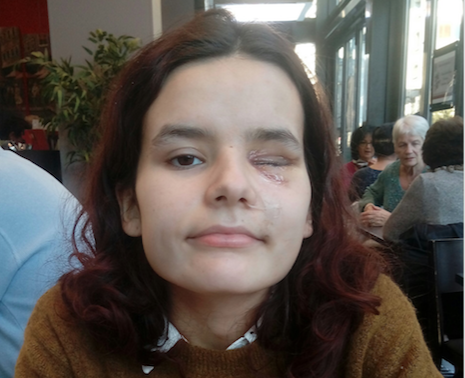 Fiorina L., 20, lost an eye in a yellow vest demonstration on December 8 after receiving a tear gas canister from a police officer.

She tells and analyses the facts at the French Online Magazine: Boulevard Voltaire.

How are you today?

It's getting better and better. The fatigue is still there, but I'm recovering very slowly.

Can you remind the reader of Boulevard Voltaire of the circumstances of your injury?

We were at the top of the Champs-Élysées around 2pm. It was pretty quiet until the smashers started vandalising a shop across the avenue. The police then began to charge in order to let the firefighters pass to put out the fire that had been started by the thugs.

We were a hundred yellow vests to the left of the police officers. It was very quiet on our side. They started launching tear gas. I don't have much memory anymore, but I took a tense tear gas canister shot in my left eye. At that moment, I collapsed completely.

How do you feel today?

They prepared for 5 minutes before charging. So it wasn't a shot decided at the last minute, in a hurry. I think it was deliberate and well considered.

On the other hand, against the police in general, I am not angry. Of course, a police officer may have done a poor job, but his action does not represent the entire police force.

A collection has been launched online to cover your care and allow you to continue with your life. How did you react to this initiative?

At first, I didn't really realise much. This initiative surprised me at the time. I really thank all the participants. It touches me deeply.

This collection has so far been used to cover the costs of travelling to the hospital by taxi and ambulance. Fees must be advanced before being reimbursed.

I am really very touched by these donations. I'm planning to make a donation thanks to this collection for medical research.

After what you've been through, do you still feel like a yellow vest?
Is the fight still going on?

I feel more yellow vest than before. I am now really concerned and outraged to see all these wounded. We must continue the struggle peacefully and not give up. I can't imagine all these people being hurt for nothing. We really need to continue the fight together.


Unfortunately, you lost an eye after that tear gas canister shot.
Were you aware, when you went to this demonstration, that such violence could happen to you?

It was my very first demonstration. I had thought about it, but not that much. I was surprised. I knew that during the demonstrations, there were always dangers, but I didn't think that bad. I didn't expect to lose an eye, especially coming from the police. I was still leaving with the idea that there might be some fighting. I was very surprised by the violence.

One of my favorite moments, when the REAL Gilets Jaunes open, instantaneously, the way for an ambulance.

And below is one of my very least favorite moments  and, although I do not know the exact context as I found the clip on twitter, I call it:

Link to the original tweet: https://twitter.com/LPLdirect/status/... Comments under the link (translated from French) read: #Bordeaux A woman got herself arrested and cornered at a bus shelter by several police officers who beat her up in an illegal manner. She seems older and shouts several times "please stop". Yellow Vests 12 January 2019.

I thank Vlad Tepes and Ava Lon for this video which actually made me cry:

And so, what does such a "Flash Ball" look like with which Macron & Co. mutilate French Patriots ? Here it is in real-life size:


At the time of posting this, I do not know the situation of Jérôme Rodriguez, but I heard part of a radio interview in which he said that "giving up" is not an option and he questioned "a country where the President applauds the protesters in Venezuela, yet treats his own people the way he does".

This video was obviously deleted under "orders", because it showed a beautiful human chain of Yellow Vests, going for quite a few kilometres along a French Country Road.

I will not even attempt to subtitle the following....she is obviously a supporter of Macron and tells the Yellow Vests to "get lost". She marched, according to my scant information, among the pack of Anti-Yellow-Vests, calling themselves "#RedScarves"  (sent by Macron & Co ? I do not know)....

Good to see #JeromeRodrigues, the #YellowVests leader who lost his eye during last weekends #GiletsJaunes demonstrations back at work - kicking off #Acte12 in Daumesnil pic.twitter.com/jmrDPSOxe1
— Katie Hopkins (@KTHopkins) February 2, 2019

Likes and Dislikes for January 2019

This project is so powerful. It educates and touches the heart. Simple people no different than us destroyed by a world gone mad. A documentary is in the works. #HolocaustMemorialDay⁠ ⁠ https://t.co/Jf0eXftF0k
— James Woods (@RealJamesWoods) January 27, 2019

The mainstream media failed to mention that the left wing had convicted murderers and paedophile advocates in attendance at the St Kilda rally. How convenient. pic.twitter.com/SjwtmltGGX
— Senator Fraser Anning (@fraser_anning) January 7, 2019


The feminist movement wants to turn masculine guys like the one on the left, into that guy on the right. pic.twitter.com/YCLiFIJ15t
— Keira Savage (@KeiraSavage00) January 15, 2019

DW Deutsche Welle went to the Goebbels School of Propaganda.

Across France, 80,000 police officers are being mobilized for the ninth weekend of nationwide protests.https://t.co/C9HBEK4xIV
— DW News (@dwnews) January 12, 2019

This just must warm the cockles of  Netanyahu's heart, it does mine :)


Four years on from #CharlieHebdo - de facto blasphemy laws are in place, the U.K. rejected #AsiaBibi and more people are frightened to speak out than ever before. #JeSuisCharlie pic.twitter.com/8i4DTJafn8
— Katie Hopkins (@KTHopkins) January 7, 2019

From the file:
"Not only in America !"

THIS IS THEIR GOAL FOR AMERICA
To destroy our Constitution...

"Our final objective is to create our own Islamic system...In that long range process of making America muslim, all of America muslim, then we have to have actual short term goals." pic.twitter.com/maxg1B2Szp
— Jennifer 🔱🇺🇸🔱 (@Jenn198523) January 6, 2019


Looks like a bunch of birthday balloons, right?
They are, but with explosives attached to them.

These explosive balloons were tied to a model airplane and flown from Gaza into Israel by Hamas, with the intention of killing innocent Israelis. pic.twitter.com/M8j8ziviOf
— Israel Defense Forces (@IDF) January 6, 2019

In case the following video does not play, click here for the link to the tweet:
Dogs are smarter than the Left. 😂 pic.twitter.com/kLwFJDYMzH

My message to the nation. pic.twitter.com/tpJMccQ18z
— Katie Hopkins (@KTHopkins) December 30, 2018


"Mohammed gave us great wisdom, 1400 years ago, about all the scientifically proven acts that Satan performs in our daily life, including filling our ears with urine. Beware of Satan..."

That ^^^ is how the Apostate Prophet introduces this well researched video, and he tells us:


"...Let's have a bit fun by looking at Islamic narrations about the weird things Satan does. They might tell you that hadiths are not always completely reliable..."

The Apostate Prophet (an ex-Muslim) always sources his statements impeccably, see below the links to everything he mentioned in this video.


Satan laughs when you yawn: https://quranx.com/Hadith/Bukhari/USC...

Satan pees in your ears: https://quranx.com/Hadith/Bukhari/USC...

Satan rests in your nose: https://quranx.com/Hadith/Muslim/USC-...

Black dog is a devil: https://quranx.com/Hadith/Muslim/USC-...

Satan watches you have intercourse: https://quranx.com/Hadith/Bukhari/USC...

I wrote earlier about "Music Lessons" in today's France, here is the video about it:

One of the privileges of writing a blog is that you can post what amuses/intrigues/interests you (within the limits of the increasingly censorious tech-giants who have become the judges/gatekeepers of "free speech". Yes, looking at you:  YouTube, Face Book, Twitter etc. )

While I have miles of drafts on serious subjects lining up, I'll give this one the priority because a) I have a friend who really needs urgent advice in this field and b) because this cheeky video "amuses" me greatly as I hope it will amuse you.

While his "delivery" needs some getting used to, I mostly enjoy Paul Joseph Watson's work: sharply intelligent, fearless, in-your-face and more often than not seriously funny.

Here is his advice to men in search of a woman: "Stop being thirsty losers" he  tells them.

(Don't get frightened away by the dry statistics at the start stop after a minute).

Oh, life is a glorious cycle of song,
A medley of extemporanea;
And love is a thing that can never go wrong;
And I am Marie of Roumania.


The New Year arrived first in Australia and a few minutes after the OZ clocks had struck the midnight hour, I hastened over to Vlad Tepes who posts from CANADA, bragging:


A very short time later, Martin, one of the most "on-the-ball" VladTepes Contributors posted this:

Here I was, in OZ, getting pictures of what had just happened only a few kms from my house via CANADA !!!  Sometimes I still marvel at progress and there is something to be said for it, except it never stops.

And while the folks in Vienna are getting ready for this years New Year's Concert right now, lets have a little musical Champagne from one of the past performances:  Prosit New Year !