About that Fake BREXIT Deal

A helpful summary on where we are with Brexit.

These documents claim there is a plan to keep us in the EU — a stitch-up between Merkel and May.


The documents have since mysteriously disappeared from the web, but luckily they were reposted at Politicalite.com. They reveal agreements made by Merkel and May last summer. Now that scenario is being carried out by May and her “Brexit In Name Only Parliament,” BRINO.


Whatever Parliament agrees this week, we are not leaving the EU."

...So writes  the courageously outspoken Janice Atkinson , Member of the European Parliament and commentator at Rebel Media.

And here now is the booze-marinated menage à trois (in no particular order) who stole your Brexit and destroyed our democracies:


The Pastor's daughter, Theresa May who - I think -  never ever had the intention for you to have your Brexit...

The other Pastor's daughter, the second worst chancellor Germany ever had the misfortune to let in,  Angela Merkel:

And now to  the "Man" who controls the destiny of Europe and its people very much as I imagine  an alcoholic would control  his pink elephants...

I simply cannot understand why he is still there ..... really....

(Psssst: Unconfirmed rumour has it, that Merkel is coveting his position, if she cannot get anything interesting at that other, largely discredited circus, the UN. )

There were some early warning signs during his election campaign.....


They lost an eye, a hand, or their face was disfigured. In a split second, their lives were turned upside down, sometimes simply because they were within or around a yellow vest protest. There are more than 2000, according to official figures, that have been injured during the yellow vest demonstrations.


Le Vent Se Lève  have interviewed more than thirty of these victims located across France in recent weeks.

This video was directed by Salome Saqué, Louis Covfefe and Antoine Dez. It was published, with English subtitles on 8 March 2019. 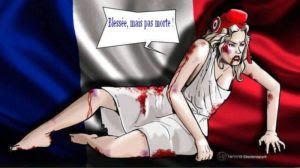 I remember the original recording of Macron inspecting the troops during the centenary celebrations of the Armistice last year as very stark and strangely fascinating, but that video seems to have disappeared. So this copy, with some strange language at the end that I do not understand,  will have to do until I find the original again.