There are cultures where little girls, even toddlers,  are forced into hiding their bodies, their hair, their everything, so as not to "seduce" the "uncontrollable sexual urges" of males, i.e.  Islamic cultures.

I feel nauseated when I see horrors like that ^^^ But okay, these are "foreign" countries. 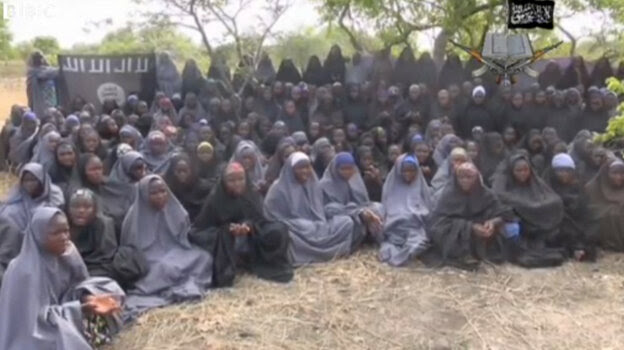 Here, in Australia,  we are civilised: men and women are equal and children are protected.  Or are they? Why are these AUSTRALIAN children veiled up to the gunnels like little Boko Haram sex slaves? "Did they change any words to your National anthem?" VladTepes  who found "it" asked me. They did not need to change the words...

Calling all CHILD PROTECTION SERVICES, worth their name !!!

Sex between an adult and a girl of the age of  these children is unlawful (in Australia and other civilised countries), because these  children are not of an age where they are legally able to give consent, yes?

Could any  parent (in Australia) give consent to a child having  sex with an adult man?

Who has given consent to these children wearing this blatantly sexualised garb, a dress which is required for girls in other countries and cultures  in order not to be raped?


Update 8.6.2014
Have a look at the relatively relevant video in this link

Muslim Sisters are doing it TO themselves !


I was preparing a post about that so-called "kidnapping" of close to 300  mostly Christian school girls in Nigeria in which I was going to point out  that this was a Slave-Raid, and that the only "Kidnapping"   at  play here is being  done  by Mrs. Obama's Hash-tag mob, kidnapping the limelight.

This  picture of "Michelle O. " limply  holding up the Nothing-to-do-with-Islam sign has galvanised  a gaggle of   compassionistas (including nearly all the  official Ex-Ladies of the French President) into playing  chorus  to  the new Hit-du-Jour.

I was just waiting for a little more of that wisdom  called "hindsight" when I discovered the MEMRI video below. I found it on the  "Muslim Issue", a blog well worth following.

I will probably  still do that more elaborate post I planned, sharing for example  the information that all "liberated" little  sex-slaves-to-be were muslims, and that "Boko Haram" is in fact NOT the name of this Muslim group.  But I think it is urgent that we see the madness that is engulfing us, perfectly at display in this video:

'Islam liberates women from the shackles of slavery'"

A few days ago, several web sites were reporting a story that could well have happened, that probably will happen in the not too distant future, but which - at this stage - had not happened. I believed it as did many others until it was revealed as a hoax originating in  an Italian-language website.

A justice of the peace in Messina, Italy, so went the story, had ordered three girls to pay a fine of $3,500 each for having worn a bikini to a private beach.

"...The offensive behaviour occurred in the well-known tourist resort of Taormina, frequented by Saudi Muslim families on holiday. Not only were the three girls hit with the huge fine, their dress was equated by the judge with that of prostitutes..."

The story didn't seem all that far fetched especially as the Saudis have already  bought huge junks of European real estate, including private beaches and that in Saudi culture, women who leave the house without a male chaperon or drive a car are considered as prostitutes.

I always wanted an excuse to play you this little song of yesteryear and it's a safe way to thumb ones nose in a direction one might soon be allowed only to bow towards...


Quote of the day comes from Sheik Yermami: whose reply to this comment "...I think wearing the hijab is very liberating...” was: "I think that woman is full of shiite."

I just love the weirdness of appearances here: what you see is not what you get; the veiled one seems to have quite a plausible argument for wearing the whatsit and at least she does  not want to cut off hands and heads,  whereas the  the collagen-enhanced TV hostess  seems to be of the fundamentalist kind,  in over-heated   favour of  Sharia,  the full catastrophe, including stoning "adulterers" to death.

Shut Up Your Face

What Really Happened in the Middle East (video)

"The civilised world must say:

And may the best of your past be the worst that awaits you in the future!

Click here
for Facts about Israel in a nutshell

Mohamed was a Macho Man ;)


"A wife may not speak to her husband without his permission,  even in bed"

(*)  For those of my readers who are not familiar with OZ politics: Julia Gillard was the first female  Prime Minister of Australia. She  was quick to detect misogyny (even where there was none), but her  linguistic prowess did not extend far enough for her to know the meaning of "misogyny".  After one of her "impromptu"  speeches to parliament went feral among the twitteraty and the global sisterhood,  the politically aligned Australian Australian Macquarie Dictionary   came to the rescue of the damsel in semantical distress, making "misogyny" more "inclusive". (Ahh the power of Power).

In that "spontaneous" speech  she  famously vowed to "call out misogyny and sexism wherever I see it",  however, an habitual breaker of promises, she didn't  keep this one either when giving a  lecture in Dubai,  this bastion for Womens' Rights.

Another "Friend" Bites the Dust

When I took my initial timid steps out of the "closet", the first friend I was going to "let go" warned me:

"you know, we are all very worried about these new  people you listen to" (I am well past my extreme late twenties btw)

She said that in the same tone in which (I imagine) the Marquis de Sade pronounced his last words: "this will hurt me more than it  will hurt you".

"B" ticked all the boxes: card carrying leftist, feminist, book club convener, compassionista. She meant well, just like all these "grenouilles de Bénitier" (literally translated: she-frogs of the holy-water-font) who tried to make my childhood and youth a dress rehearsal for the purgatory which would, they promised,  be my place of permanent residence in the afterlife.

She refuted my first argument by saying that genital mutilation didn't happen "all that often", and that  Ayaan Hirsi Ali probably exaggerated anyway  because she was "a right winger".  As a one-week  tourist to Paris she enjoyed the rare privilege of  lunch in the house of a Parisian friend of mine, not a given as Parisians would  rather take you out to a restaurant until  they know you. Yet my politically correct  ex-friend never sent the tiniest  "thank you" to my friend who had gone through the trauma of  cooking despite  not being  really good at it.

I would not have answered B.'s  emails after this even if they had come.

The second friend from my "former" life  shocked me deeply when I discovered her blatant racism. She is quite a lovely woman, intimidating without meaning to be, punched-up victim in a violent lesbian relationship, vegetarian, authentic  greenie and all that. I liked her a lot albeit being often ill at ease in her company because she was sooo genuine and  soooo judgemental without realising it.

My already uneasy "tolerance" got the deadly coup de grace, when we were swimming one day in the rock pool of her coastal Australian town. At the sight of one African black swimmer she exclaimed:

Everybody used to be WHITE,

the whole  city of Newcastle was sooooo  awfully white before

"A rose by any other name would smell as sweet" and "racism by any other colour would stink as high to heaven".

Just two days ago, I was "dropped" by a long-lost-and-found-again boyfriend who fits perfectly  into this little populist saying: "if you are not a socialist/communist at 20 you have no heart, if you are still one  at 40 you have no brains".   Unlike the poor housewife in the song of Song of Lucy Jordan  I had "driven in a sports car in Paris with the wild wind in my hair" although I had forgotten the details.

Through the miracle of the Internet the owner of this little signature car of capitalism, a red Alpha Romeo, had found me again a few weeks  ago.  French, he still lives  in France and is now voting for Melanchon, a nasty anti-white racist piece of extreeeeeme leftism. Like so many uncritical  consumers of the conformist French media    my former (boy) friend decreed that I was in cahoots with the devil incarnate by not wanting to burn Marine Le Pen at the stakes.  So this soufflé certainly did not rise twice.

Ah yes, what closet have I come out of?

I used to be the cowering conformist, the  trying hard to be politically correct  pseudo Leftist:

But now, out of this closet, I can breathe again, and declare loudly:

I stand by Israel (not very fashionable among the Left)

-Islamism and its proselytising, conquering  totalitarianism
-I don't like goose-stepping  to the sounds of the PC drill

- Jew-hatred
(don't give me the "I am an anti-Zionist" fig leaf, Moses was the first Zionist, David was a Jew and  Goliath was a Philistine and times might have but  things haven't changed !)

- mass murder in the name of some tin god

- the hypocrisy of bullies who accuse the Australian PM of misogyny while condoning womens' disempowerment under islam. (looking at you Julia Gillard ! )

.....So my ex friends, and ex friends to be: I am out of the closet and I will not cry if another one of you bites the dust: