These are not "French" (video)

This shocking documentary was aired a couple of days ago on one of the few French TV stations that can lay claim to a modicum of objectivity. It caused hardly a ripple in France and most of  my French acquaintances  - normal, educated middle class burghers - chose not to watch it. One even  told  me "I know what's going on, I can do nothing about it, it upsets me, so I am watching a documentary on Australia tonight".

I know the sample of the Frog who doesn't realise he is being boiled does not hold up scientifically, but I will use it anyway:

... because there are many more living in France who at the very least approve of this savagery (some 700 of this ilk have left France to join the "jihad" in Syria),  and the ones you see in this confronting documentary will be coming back to France, free to... ?

Those who would rather avoid these very confronting images, can find
the transcript on the elegant Gates of Vienna and h/t goes to VladTepes

Please note, these vermin might be "French" on paper, e.g. have a French passport (often double nationality with a Maghreb country - just like the Arab  speaker for the French Government and potential future prime minister of France, Najat Vallaud-Belkacem, who  holds  the double nationality Moroccan and French), they may even have lived in France for two or three generations, but they are not  "real" French.

Yes, their demographic is increasing at a dangerous speed  in France to a point where I sign my post cards from Paris ironically as "greetings  from Africa on the Seine", and yes they are the favourite "disadvantaged youth" of the French Minister for Justice, Christine Taubira who protects them because as she says "they carry the stigma of colonisation on their shoulders" - but they will never be French - not even "European".

Yet, naive little girl  tourists will think their love thrusts were with a "real Frenchie", cynical French politicians with an agenda and  the dangerously dhimmified French Media, will label as "raaaaaaaaaaaacist" anyone daring to make the connection between islam and what these savages do, while the fully left-politicised Judiciary will  prosecute anyone who dares pointing out the truth.

My loathing for their unspeakable savagery is followed by my contempt for their so-called  "cuuuuultural background" - and as much as they want to be seen as "French", they will never be.

For those who read German, Goethe put this last idea in a beautiful nutshell in his Faust I, like so:

(translation would never do justice to Goethe).

An ugly postcard from Paris


When I saw this tape, I cried.

And no, it did not come from any French media who are ignoring this kind of unfashionable reality (they wouldn't wanna frighten the camels of Qatar), I found it via  VladTepes.

Yes, nauseatingly, this too is Paris, the new anti-semitism where Arab and Sub-Saharan muslims are beating up French Jews but, of course  only if they are in superior number  e.g.  3 against 1, or in strength.

Many French non-Jews are closing their eyes to this because of fear...denial... latent anti-semitism...or what? The most despicable players in these nasty games are the French conformist media who will simply not report these "incidents" and if they do, the words "Arab",  "Muslim", "Africans", "Immigrants" are a big taboo.

Courageous French  people who do name the beast by its name, are at the very least called "raaaaacists",  because as we all know, Islam is  a race and only pathological "Xenophobes" will point out that most of the violence happening in France is perpetrated by thugs issued from what is euphemistically referred to as "la diversité".  But if these brave French people  do end up before the Courts and the most politicised Judiciary  I have ever come across, they do not stand a chance. For a start  they have against them the might of the  misnamed "Minister for Justice",  Christine Taubira,  who is sometimes (justifiably)  referred to as the "Patron Saint of the Canaille". She is behind a new law, which will protect  these violent criminals from being  incarcerated if they are under 19, even if they are violent repeat offenders. Her reason for this she says is that those poor "youth" are carrying on their young shoulders the stigma of colonisation.

So, the attackers of this man will probably remain free to  do some more of the same, while  the French media will keep singing the praises of peace, love, tolerance and the beauty of the "vivre ensemble". To see these proud French people and friends celebrate at the end of a demonstration on a sunny Sunday afternoon in Paris, "warms the cockles of my heart" as they say in that other country I love.

The Elephant in this French room?

And where is the Elephant?


The video above is not the latest, but things have not changed for the better. The aggressions and violence, especially from "youth" (for that is what the euphemistically named "authorities" and the media  call criminals of arabs/muslims/subsharian background) have, if anything increased.

If you read French I recommend a book that came out in France last year  and made a persona non grata of its author: he not only had the kamikaze gall to tell the truth, but he documented every single terrifying detail and sourced everything he wrote impeccably.  He used to be a  journalist of a small town news paper, an ambulance chaser kind of of journalist as he said. Knowing  how dangerous it was to tell the truth in France he wrote it under the nom de plume of "Laurent Obertone". The title:  La France Orange Méchanique. It tells of the "ensauvagement" of a nation: Every 24 hours: 13,000 thefts, 2 000 aggressions, 200 rapes. Not a book you necessarily want to read before coming to France if you are of the eyes-wide-shut kind.

There are some brave souls who speak out about what really ails France, like Christine Tasin from Resistance Republicaine and Pierre Cassin from Riposte Laique. Inspired by the Swiss model of direct democracy,  they  recently organised a march through Paris demanding  a referendum on Immigration, they were joined by different groups, notably the wonderfully dynamic young "Generation Identitaire":

While the French fret, their President, Francois Hollande, mounts his scooter every night,  and heads  to a little love nest, just a couple of blocks away from the Elysee Palace to join his new lover, Julie Gayet,  for which he just dumped the 10 year older model, Valerie Trierweiler. 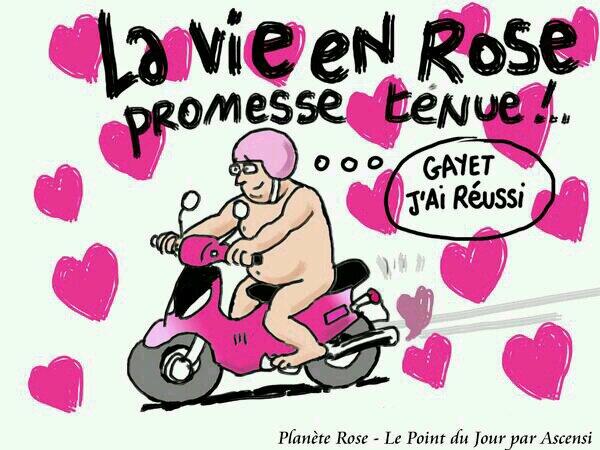 The "Femen" might have have inspired them, but the difference of this protest against the Muslim veil is that it is Arab/Muslim women fighting against the oppression from their mullahs and assorted Muslim males (and, let it be said, quite a few collaborating females), and that they go "all the way".


While perhaps not totally fair, the slightly ironic comment by Vlad Tepes is quite valid as an additional perspective on the subject, and Vlad Tepes does actually much much much more against the oppression of women under Islam than all the fake compassionistas from the trendy Western "left/feminist" scene have ever done:

"In an attempt to outdo Femen, a group of protesters in Paris decide to go fully naked to protest Islam. I would expect within a year or so, to see women’s groups marching around wearing a full sized X-ray of themselves or possibly an ultrasound or maybe even an MRI. But for the moment they seem content with full nudity"

Well, seeing that we are in France lets get with the program:


PS: I don't think the girls were cold, since it was a very mild winter,
and for the last few days we had late spring temperatures
and nearly as much sunshine as in Australia.

Pigeons as a metaphor

On my recent return to Paris, after a longer than usual absence, I have found that  'good' things  are still here, but bad  things  have worsened.  Zum Beispiel:

Antisemitism in its full-on vulgarity has become more blatant, more vicious and more "French" than ever (Dreyfus wouldn't have a chance at "rehabilitation"  in today's France) , and my perennial   friends, the crows who used to enjoy the left-over kitchen scraps I offered them  from my Wasistas   have been replaced by ... pigeons; my Eagle's Nest has become  a "Pigeon's Colony"....