20 questions for Muslims: Why and Warum ?

In Defence of Milo

I think Milo is paying for being a conservative

The commentary below, insightful, independent and brave as commentaries from Black Pigeon Speaks  usually are, was posted immediately after the "execution" of MILO and the cowardly "dis-invitation" of this brilliant speaker to the "very important  annual speak-feast" of Conservatives" CPAC

Since it was posted, Milo's publishers, Simon and Schuster (*)  have,  in predictable servility to the more strident  bullies, announced that they had cancelled their  publishing contract for Milo's upcoming book, and Milo has explained himself in a press conference and has resigned from Breitbart. Probably more has happened in the meanwhile, like a rather disappointing, virtue-signalling sermon from Stefan Molyneux  - (I'm a fan and it's the first time that  I gave him a thumbs down) - and yet, this commentary below remains fresh and relevant.

Just a couple of random thoughts after this:

There was the wife of one of one of Australia's most popular Prime Ministers, Bob Hawke, Blanche d'Alpuget who revealed in 1993 that she had been sexually molested as a 12 year-old by a 54 year-old judge who was a family friend. Ms. d'Alpuget did not see herself as a victim either. Apart from a little tut-tutting, there was no condemnation of the lovely Blanche "coping" in her "own way" like Milo,  she was of the Left you see.

Daniel Cohn-Bendit, leader of the Greens in the EU once extolled , on French TV, the pleasures he got from little 4 year old girls "playing with his penis" (you can google it) while working  as a kinder garden teacher; he was even more "forgiven" than a mere "leftie" since being of the  Left PLUS Green is a free pass to do just about anything.

Herr Adolf Schickelgruber  actually was a bit of a greenie himself, and he certainly was  a socialist (his Party's name said so: National-SOZIALISTISCHE Partei = Nazis for short)  and so, he  obviously came from  the side of Milo's attackers.


(*) (I hope that whoever replaces these cowardly 'Simon and Schuster' will make a lot of money and I will buy the book, of course)

Cleaning up the UN at last !

could this be the crack
where the light gets in?


P.S.: The only quibble I have with Nikki Haley is around Minute 1 of the video, where she accuses Syria's President, Bashar al-Assad of slaughtering hundreds of thousands of Civilians. It's my personal opinion that he did not "gas his own people, let alone children" as the Obama Administration and his numerous acolytes would have us believe. I did not believe it then, I do not believe it now and I never will. But I think the metaphor of "no omelets without breaking eggs" could apply here.

Although it's only the 2nd part of Netanyahu's and Trump's combined  News Conference held yesterday, it is still longer than the videos I usually post. But, if you like Israel, Bibi and Trump, as I do, you will enjoy it.  I was touched by  Bibi's obvious joy and relief to be among friends at last and it brought home to me how lonely and betrayed he (and the Jewish People of Israel ) must have felt during these loooooong and dark 8 years just past.


A few quotes from the video:


I liked Netanyahu's explanation of "why the Jews are called Jews":

"...Well, the Chinese are called Chinese because they come from China


The Japanese are called Japanese because they come from Japan


and  Jews are called Jews because they come from Judea.


This is our ancestral homeland...Jews are not foreign colonialists in Judea..."

And he revealed something that is not widely known, or perhaps just well hidden about the ballistic Iranian missiles:

"...By the way, these ballistic missiles are inscribed in Hebrew with "ISRAEL MUST BE DESTROYED"....they want to get to a nuclear Arsenal, not just a bomb, a hundred bombs..."

He also  believes (accurately in my opinion), that "the issue of the settlements is not the core of the conflict, nor does it really drive the conflict..."  but he agrees that it has to be discussed and considered.

And to close, a cute quote from Trump:


Jacquiline Louise "Jacqui" Lambie", an Australian Senator, explains - succinctly and well I think - why Sharia Law is an 'anti-democratic cancer that doesn't belong in a free society'.

Independent Senator for Tasmania Jacqui Lambie has followed up her fiery clash with a vulgarly strident Sharia law Supporter on tax-payer-funded, islamophile ABC TV (whose main "news" source is Al Jazeera) with the release of a YouTube interview which explains why Sharia Law is an anti – democratic cancer that doesn’t belong in a free society.

“Like most Australians I’m not an expert in Sharia law – but I’m going to make 6 quick obvious points. Sharia Law is:

2) Support for Sharia is an obvious sign of radicalisation and Terrorists are fighting to the death to force it on the rest of the world.

3) Sharia Law is Anti-democratic (show me a successful democracy in the Middle East..)

4) Sharia Law imposes the death penalty on Gay people for being Gay.

5) Sharia Law imposes the death penalty on women who are unfaithful to their husbands.

6) Sharia Law denies the right of Jewish people to live in peace in Israel.

• If you want a technical description of Sharia Law – it is religious, criminal and civil law all rolled into one code – it has no separation of powers and automatically makes Religious figures: Law Makers, Judges, Jury and in some cases executioners.

• If you support Sharia law – you accept the all the good bits and all the bad bits.

• Highlighting and accepting the “good bits” of Sharia Law – like praying 5 times a day while at the same time – ignoring the death penalty for women who have sex outside marriage – is like saying, I only want to be a little bit pregnant.

• Acceptance of Sharia Law – is clear sign of divided loyalty. You are loyal to some religious leader in the Middle East and his rulings – not to the Australian constitution and our democratic system of government.

Sharia Law is an anti – democratic cancer that doesn’t belong in a free society and fails to respects the basic Human Rights of Women, Gay and Jewish people.” said Senator Lambie."

While on the whole,  Jacquie Lambie is a little too far left for me, I do admire her more conservative side such as her  feisty and courageous stand against the creeping (some would say, galloping) islamisation of the West, specifically of Australia in the Senator's case. I also like the assistance she seems to  give to the War Veterans (being one herself) and  her endearing passion for her native Tasmania.

More on the feisty Senator from the Apple Isle, here on Wikipedia.

Marine LePen is in the House

The next Président of France, I hope. 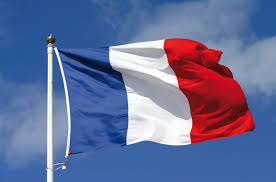 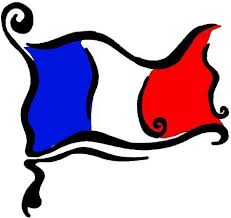 I am a CONSERVATIVE...

...and so, according to the inimitable Paul Joseph Watson, I am actually "cool" and those who still sneer at my right-wingery are the real  dags, because Conservatism is the NEW Counter-Culture. So there !  Pfffffttt !!!


The definition of a Millennial taken from the Urban Dictionary


Born between 1982 and 1994 this generation is something special, cause Mom and Dad and their 5th grade teacher Mrs. Winotsky told them so.  Plus they have a whole shelf of participation trophies sitting at home so it has to be true.

They believe themselves to be highly intelligent, the teachers and lecturers constantly gave them "A"s in order to keep Mom and Dad from complaining to the Dean. Unfortunately, nobody explained to them the difference between an education and grade inflation so they tend to demonstrate poor spelling and even poorer grammar.

At work, Millennials believe themselves to be overachievers who just aren't understood by their loser bosses. Even Mom said so when she showed up for the interview. They are the only generation in the universe to understand the concept of work life balance and to actually want to find a fulfilling career. All those Gen X losers just don't get it what with hoping to keep their jobs and pay the bills, but they are just corporate drones so who cares what they think? They should be smart like Millennials and get Mom and Dad to pay for that stuff until they can work out what they want to do with their lives and then get rich doing it.

Well, I've been here at this job for 6 months now and I've been on time mostly so I should get a raise now 'cause I've paid my dues.

Did you know we are the most technologically advanced generation, like evah? And smart too. They call us millennials cause we were born before the millennial I think.

The Easy Way to a German Passport


Would the poster of this video at  "Face of a Dying Nation" be just a little  "cynical" in her editorial, I wonder?

The phenomenon of childless and bitter elderly Western women looking for exotic adventures abroad with African gigolos who proceed to exploit their gullibility for citizenship in a Western country is not new. But more and more frequently, "leftover" European women get involved with the newly arrived young African men, called "Syrian Refugees" by the media, and subsequently get tricked into citizenship scams. The African males see conning old ladies as pathway to "become a German" faster. Usually their lulling words of "I love you" don't come exactly straight from the heart as they abandon the ladies as soon as they get their papers."

I think it just has to be  TRUE LOVE, since the "Syrian Refugee" obviously does not even mind, that his Cougar has forgotten to put her dentures in.


On the other hand, these "Syrian Refugees" seem to have a way with the perimenopausal Ladies: (yes I know: miaow) 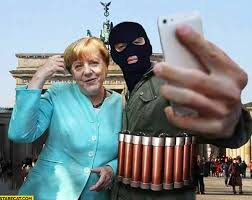 This  islamic "sermon" comes  from a Mosque in Trudeau's  Canada, but according to a very brave EX-Muslima, Sandra Solomon, this hate speech, calling openly for the extermination of Jews is not limited to the country who now has a mini-Obama at the wheel, it is repeated all over the place, in countries with islamophile Führers like Merkel's Germany, Hollande's France, WhatsHisName's Netherlands. And even in countries that have finally voted for  leaders that are more than a shiver in search of a spine, the invitations to kill Jews and Kuffars (metaphorically and literally) continue to be issued  and, alas, accepted  all too often.

Do take the time to read the sub-titles (*) - (I had to push the stop-button several times to check that I was seeing alright) - and admire the courage of this  young woman who has  several interviews on Vlad Tepes  where I found this video.


First they came for the Jews
and I did not speak out
because I was not a Jew.

Then they came for the Communists
and I did not speak out
because I was not a Communist.

Then they came for me
and there was no one left
to speak out for me.

(*) I have now found the transcript of this islamic incitement to genocide at the excellent Gates of Vienna who add the following:

"...The words spoken by Sayed Al-Ghitawi, the imam of the mosque, are not significantly different from those spoken by any imam at any other prayer service there or at any other mosques. Those chanted passages are, after all, standard Islamic invocations drawn directly from the Koran and the Sunna.

Jonathan Halevi of CIJ News and Sandra Solomon are demanding that this imam be charged with violations of the criminal code against incitement to genocide..."