The French pray for a German Soccer Victory...

...because tomorrow they play against Algeria and a win by the Maghrebians means violence, burnt cars, destroyed shopfronts, "tournantes" (i.e. gang-rapes), and increasingly threatening claims of "France is Ours!!!".  Hordes of Algerians will take over the main streets in nearly every town and city in France, including the  Champs-Élysées.

Here is a little slice of life in France after an Algerian soccer victory: this one was recorded last week after Algeria qualified for the quarter finale in the World Cup. It was relatively "tame", only one car was burnt (there were many more all through France yet  the main media will not report on those bonfires  in the interest of not "inflaming" what they call "le vivre ensemble de la diversité").


and I too want the German Team to win tomorrow...

Update 3:
Did you see the riots in Switzerland after they were eliminated? Here you go:

I am quite sure that question was meant  to "trip" Marine LePen. A considerable part of the  French Media hates only one thing more than the Jews and that is Le Front National, the Party of Marine Le Pen.  But I was chuffed  to see that this journalist was not rewarded with a "Petite Mort" for himself   while his wannabe trick question got shot down in flames. (I told you I like clichés)

He introduced himself as "of the Jewish religion": I wonder if this was meant as an alibi for his obvious dislike of Jews, used a little like those real Jew-Haters from the BDS movement do it when they present  themselves as "Jewish" or "Child of Holocaust Survivors" etc to buy some credibility....... soooo many DNAs, sooooo  little time to test them........


In case I have not said that already, and repeatedly:

And here is another magnificent French woman,  I was a fan of her long before I knew she was Jewish. I came upon her grave not all that long ago while walking around a cemetery, as one does. Until then  I only knew her under her stage name  Barbara. She is buried in Paris in her family grave. Born Monique Serf in Paris in 1930 as a Jew she was, of course, a target for the Nazis. Two decades after the end of the war she travelled to the heart of Germany, Göttingen and this was the magnificent result:


I must confess, my door was nearly shut on my willingness to ever like an Arab Muslim, especially one from Algeria. Although I had  been fighting my prejudices for a long time , I had finally  come to the conclusion that prejudices cease to be prejudices if their truth is confirmed so often and so widely. I had enough personal experience, anecdotal evidence and statistics to just about lock the door on my conclusions and throw away the key. A lot of bad things have happened and are happening "in the name of Allah" and the worst among the often very violent  perpetrators from the Maghreb  (at least in France) seem to be originally from Algeria like for example the killer of those little  little Jewish children in Toulouse.


And then, along comes a voice like the one of "Aldo Sterone":


All I know of him so far is that he left his native Algeria some 20 years ago and now lives in London. From what I gleaned  from his videos, he is Muslim and Arab. He records his  10 minutes meditations in an underground car park and, although his target audience seem to be his compatriots, he has captivated me and, for the first time I actually had a  glimpse of an Arab perspective I cannot only live with, but which makes me see that their "aggression" might actually be a justified fear.

In this video, recorded just after the recent European elections, he tells us why Arabs should actually vote for Marine Le Pen:


Then, a few days ago, "Aldo Sterone"  recorded a tape which showed the deep love he has for the country of his birth, and what  I found quite poignant is the "tough" love he has for all but the terminally lost cases of his compatriots. That obviously did not go down well and this video is his answer to the attacks (and probably even serious threats) he received, as do all who DARE criticise Islam:

Enrico Macias, the singer of this song, a Jew, is also born in Algeria. He had to leave the country he still loves and because of the objections by some Algerian politicians and assorted bullies  he cannot return à la recherche des temps perdus.

Perhaps the same destiny will await Aldo Sterone if he continues to be so brave and outspoken.

Australian Prime Minister Tony Abbott, while still leader of the Liberal opposition in December 2012, had told Haaretz that a government he leads will be "unashamedly and unapologetically pro-Israel, akin to that of [Canadian Prime Minister] Stephen Harper's Conservative government"

In an interview with the Times of Israel, Julie Bishop (a lawyer in her former life) questioned the accuracy of the term "occupied East Jerusalem", stating:

“I would like to see which international law has declared them [Jewish settlements] illegal.”

Also, earlier this month, Australian Attorney-General George Brandis, speaking in Parliament, said that the administration does not consider the eastern section of Israel’s capital city to be “occupied.” The next day, in a statement drafted in coordination with Bishop and Peter Varghese, secretary of the Department of Foreign Affairs and Trade – following a lively debate among Australian lawmakers – Brandis reinforced the message, saying:

“The description of east Jerusalem as ‘occupied East Jerusalem’ is a term freighted with pejorative implications, which is neither appropriate nor useful. It should not and will not be the practice of the Australian government to describe areas of negotiation in such judgemental language.”

Just for a little while I thought that Australia's new government would be different and I was quite proud of it. But, threatened with blackmailed with economic sanctions by Arab Palestinians and local Muslims, Australia backtracked on its honourable opposition to the term "Occupied East Jerusalem". So, today they are just another dhimmy - or a kind of  "whore of Babylon" and dancing around the golden Camel, if you forgive me for getting my metaphors and bible-stories all mixed up: being ashamed of my government does that to me! Pffft !

Part of the article above  comes from  here
h/t :Vlad

Was God the first Zionist ?

...or weasel words to that effect are the classical protestation of Jew Haters who all come from different (but often quite low) levels of intelligence. Taking a walk through some of their brains, one would probably find quite a lot of the images from  that nasty hoax The Protocols of the Elders of Zion. I will not challenge the probably very short attention span of my beloved readers with long explanations of "what is Zionism" but for those who would like to know more, this virtual library would probably be a good place to start with.

I just want to tell you about  a  recent exchange I had with a rather fundamental Christian of the "Jews-killed-our-Jesus" kind. I had told him about one of these happy-making 'AHA' moments my blogger friend,  Geofffff, had given me with his statement:

"Moses was the first Zionist":

"Moses did nothing of his own volition. He just obeyed God. It was God who told him to take the Jewish people out of Egypt and to lead them to safety in their promised land, Israel."  (I'm quoting from memory).

BINGO, so it was not Moses who was the first Zionist, but God himself.


Quote of the day:

"They dont hate the Jews because of Israel,
They hate Israel because of the Jews. "
.
Posted by Rita at 18:36 No comments:

Obama, the best friend the Taliban ever had, Erdogan for whom democracy "...is like a bus, you use it to get to your destination..", the Justice Minister of France, Christiane Taubira, the best friend la canaille  criminals ever had, and François Hollande, the President of many mistresses all seem to have at least one thing  in common: they don't like to hold their own umbrellas. The German Chancellor does, as seen during her present visit to France. I prefer people who hold their own and so it follows that of all those politicians I like Angela Merkel best. 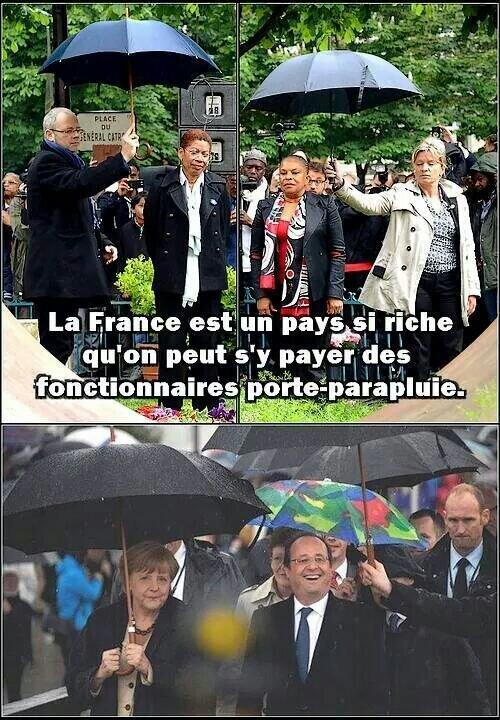