...and still love this city of lights, despite some dimmers, political, societal and personal ones. The personal one du moment is a very traditional old cold, collected by throwing all the good advice of "dressing for the season" to the icy vent du nord. Nothing that can't be fixed by a thé au citron avec a hearty dash of whiskey, a few dolipranes (I always think of "dollybrain" when I  pronounce the name of this french panadol )  and an early night. 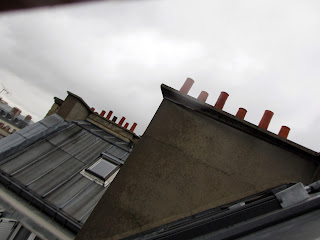 Sur les toits de Paris ^^^
And Sous le Ciel de Paris, sings Juliette Greco, who was that beautiful before the sillicone era. Jean Paul Sartre said of her: "Gréco a des millions dans la gorge : des millions de poèmes qui ne sont pas encore écrits, dont on écrira quelques-uns..."
Today 85 years old, she is just about to give 3 concerts here  at the Théatre du Chatelet. I could not get any tickets, fully sold out. In Australia the use-by date of females seems to hover around 25 - here they are packing them in long after the 3 score and 10. Okay, she was the Goddess of the Paris Bohème and is a "national treasure" (although I dont think that France has officially such a silly title), but even as Ms Average, one is not as "invisible" in France as one is in Sydney after having "coiffé la  Saint Catherine". (A medieval French tradition has girls who are not married by the age of  25 don the bonnet of St. Catherine).
Posted by Rita at 08:30 No comments: