"Oh, East is East, and West is West, and never the twain shall meet,


(*) With apologies to Rudyard Kipling I have omitted the 3rd and 4th lines of his poem "The Ballad of East and West" deliberately and perhaps somewhat wickedly....


You might find some explanation about the origins of this Jihad against Music here in this video A Music Lesson in France which we subtitled some time ago.


In Western contrast now, some of "the President's Men":


[The US] Attorney General William Barr took a break from his day job to showcase one of his hidden talents during an event with U.S. attorneys. Seated on stage Wednesday during the Justice Department event, the nation's top law enforcement official disappeared behind a curtain as a group of Pipes and Drums bagpipers from the New York Police Department, the Emerald Society, assembled in front of the auditorium stage.


Barr re-emerged onstage and tucked a bagpipe under his arm as the crowd of government attorneys laughed and applauded. A low drum beat sounded and the traditional bagpipe march "Scotland the Brave" began with Barr joining in. The crowd gave him a standing ovation at the end of the performance.

Barr explained that this was the first time he had played since his daughter's wedding. He found out that the Emerald Society pipers were coming as a surprise for him -- so he thought he would surprise them by bringing his bagpipes. (Source) 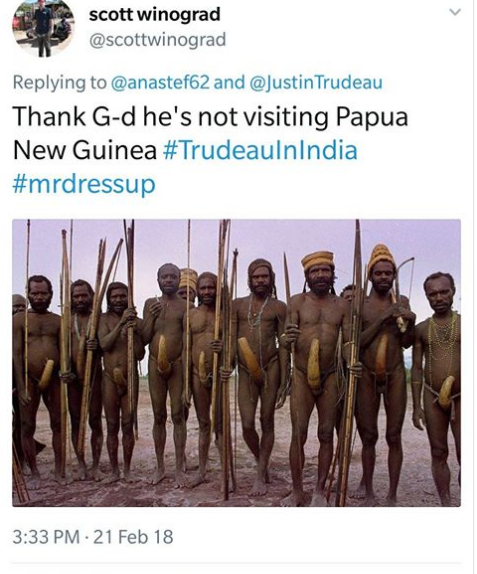 I consider "Miles" McInnes one of the most brilliant satirists and much much more "misunderstood" by those who do  not "get his biting-take-no-prisoners" style of humour,  than poor obvious Justin Trudeau has ever been by people with a shoe-size++++++ IQ.


"Let's put our Trust in Justin", they sang (before the elections).

A young German Girl is coming out


I only just discovered Naomi Seibt, on Brittany Pettibone's Chanel and, listening to that interview gave me a huge injection of Hope for  Germany.

After being bombarded by the Main Stream Media with masses of seemingly brain-washed  Merkel-Youth such as  Antifa or Schoolchildren wagging  school each Friday and even getting ferried by (Education Ministry-financed?) buses to huge demonstrations "against the climate (sic)" etc. I had lost hope for the country of my birth.

But listening to this 18 y.o. German Girl  (in the video below but also in this interview with Brittany Pettibone  ) has put a new spring into my step. 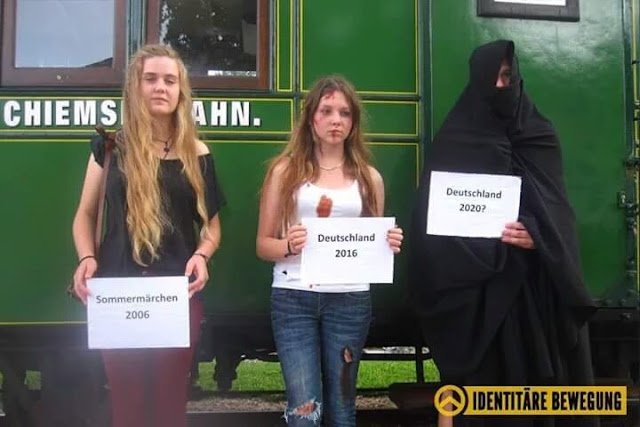 Yup, I have neglected you and my blog quite a bit  lately, partly due to some personal (including health ) issues, but mainly due to the fact that - at core - I am a Luddite and that I came across technical difficulties which I let get the better of me.

And then, all this  de-platforming of conservatives and assorted islam-critics on orders from  Stasi-like  operatives etc, totalitarian in its core, Kafkaesque in its methods,  led me to a certain self-censorship/lack of enthusiasm and voilà, here I am , more than half-way through a whole month with just 2 meagre postings.

Well I am baaaaack, with a post that will, because of its length alone of 45 minutes, demand some effort from you, but it will be worth it.

Two of the most interesting people on today's conservative side of politics (two of my personal favourites) are discussing the "great challenges facing our Western world in the 21st century":

Beatrix von Storch, a REAL Prussian Princess and Member of the German Parliament of the AfD  is interviewing Steve Bannon, one of the men responsible for the fact that the US (r)ejected Hillary  Clinton , and on whose recommendations I would have and America did vote for Donald Trump and thus dodged a dangerous bullet.

I never knew that Steve Bannon is a Catholic and he will discuss with Beatrix von Storch what the formative events in his life were and what important role his faith plays for him.

I am so glad, that, among other things, he shares my opinion about this unholy trinity (Merkel/Macron/Pope Francis) that endangers OUR Judeo-Christian Culture at the moment the most.

03:35 Die Bürger wachen auf und versammeln sich. / The citizens are awakening and gathering around a flag.

10:45 Die Wichtigkeit der Meinungsfreiheit und warum sie verteidigt werden muß. / The importance of free speech and why we have to fight for it.

37:25 Das Weltwirtschaftsforum in Davos und die Politik der Globalisierung. / The Party of Davos and its politics of globalisation.

Have been away from my normal blogging for a while (technical and other reasons), but this little item drove me back to the keyboard:

It is only a short tweet, but it soooooooooo made my day in its delectable - inoffensive - irony that I will give it a whole post, I think it encapsulates perfectly the way (some of ) we Westerners submit to the wool being pulled over our eyes by our cowardly and/or corrupt political Führers and by people who often are far from being our intellectual or ethical superiors and whom we should  NOT indulge, let alone submit to.

"Wearing the pasta strainer is my divine obligation.

But we, the pastafarians, are mocked and stigmatised.

So much racism in society is just impossible.

The girls in high school reject me,

everyone looks at me on the street.

But they don't know our religion."

Likes and Dislikes for June 2019

Things I liked, loved, disliked and/or loathed during June 2019

Former officials in the Obama Administration are CURRENTLY advising Iran on how to defeat U.S. foreign policy.

How is this not treason?

Grenoble, France, end of "Ramadan" not a Français de Souche nor a woman of any nationality in sight. That is France today.


When I see a picture like this, I think many things. I wonder if that baby is still alive, and also: If the father was to come across someone from the USA, Australia or Europe, what would they talk about? Will he say that he has immediate family living in the West? pic.twitter.com/URukB0T9aw
— Imam Mohamad Tawhidi (@Imamofpeace) June 6, 2019

As someone who totally despises Angela Merkel (the second worst Chancellor Germany ever had) for the way she endangers  the German people and destroys the country of my birth, I very much appreciate the deserved disdain with which President Trump treats her in this little video.

Praise be to God, that after much research, we have invented a new way to greet each other. We request that your Foreign Ministers and Ambassadors learn this method of greeting before travelling to the Middle East. Thank you.pic.twitter.com/5XSlDFaiA2
— Imam Mohamad Tawhidi (@Imamofpeace) June 5, 2019

President Trump and his first Lady visit the Queen

1. I just L O R R R V E this, you may call me a “groupie” – I was always a sucker for Pomp and Ceremony. And with the Queen and President Trump we have at least two Germans who represent countries that fought the Nazis – at least in the past.

3. Am just drooling with Schadenfreude at the thought of this Jew-hating Poison Dwarf, Sadiq Kahn, whose colour must have turned from off-white to GREEN, seeing the JEWISH Son-in-Law of the POTUS honoured while all this nasty terrorism defender could do is join the execrable gutter-dweller Jeremy Corbyn spreading their bile among the vulgar haters in London street protests against their betters.

....Kahn reminds me very much of our very dumb and incompetent Mayor of NYC, de Blasio, who has also done a terrible job - only half his height. In any event, I look forward to being a great friend to the United Kingdom, and am looking very much forward to my visit. Landing now!
— Donald J. Trump (@realDonaldTrump) June 3, 2019


Caption reads: When she comes home one hour earlier than expected.

#YazidiGenocide survivor: I saw blood of my father on the hand of our Sunni neighbors who killed him.
An Ugly IS fighter like a beast with too bad smell, long beard picked me out of 150 Yezidi girls.
He raped and tortured me everyday.
I was afraid to look at his face.@TarekFatah pic.twitter.com/HZ7Q0A3vBL
— Azzat Alsaleem (@AzzatAlsaleem) May 31, 2019