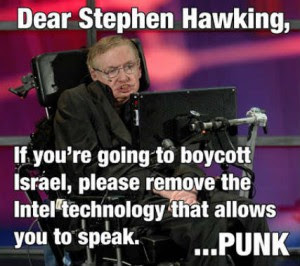 I am so incensed by the anti-semitism displayed by Stephen Hawking, that I dont trust my own prose to be moderate enough. So I copied this article  from Geofffff's Joint:

Israel is a leader in adult stem cell research  for the treatment of the neurological disease ALS or Lou-Gehrig's Disease. Research is at the clinical trial stage. This is the disease that Stephen Hawking has.

The equipment that Hawking uses to communicate with the world has at its core technology developed by Intel Israel.

To accept an invitation from the president of Israel to a scientific conference and then to publicly cancel and join a boycott is more than just boorish manners and ignorance.

Zionist Conspiracy has a suggestion that should relieve Hawking of any pending moral dilemma now that he has used Israeli equipment to add his voice to the racist and morally repugnant BDS campaign. Harsh but fair...

"... I would like to propose that if Israeli researchers discover a cure for the disease, it should be refused to Stephen Hawking.   After all, we would not want to compromise his strong moral stand on behalf of the "suffering Palestinians"!   And boycott for the goose is also boycott for the gander.  Let us not put Hawking into any uncomfortable ethical position now that he has decided to join the BDS terrorists and boycott Israel.  So let us help him avoid compromising his principles and simply let him know in advance that he will be denied any cure for ALS that ever comes out of any Israeli institution or research."

If a picture is worth a 1000 words, this one, collected from the wickedly spot-on Sheik Yermami gives us 4000 words: