The French Patriots are calling you !

The illegal Muslim prayers must stop,
otherwise, lets all go to Clichy
on November 24, at 12 o'clock!

The scandal has lasted for 8 months. Everything has been tried to stop the intolerable, the unacceptable. Even politicians with their tricolored sashes have tried to reason with the offenders who trample the Republic and its laws week after week, when there is already 1 mosque in Clichy, often half empty.

The elected officials were greeted by arrogant snickers: "we are here and we will not leave".

That's enough ! A "mediation" meeting between the Prefect, the Mayor and the Muslim representatives is scheduled to take place tomorrow, Thursday, November 16th.

We do not know what it will give, we are afraid that it will result in the capitulation of the Republic and the illegal granting of a room to the offenders, when the water cannons should have done their job for eight months, as in all forbidden demonstrations ... of patriots.

It is also possible that the mediation leads to nothing and that from Friday 17, Muslims want to impose their prayers again on all residents of Clichy. In this case, we call upon the prefect, who has been very complacent for eight months, to put an end to this aggression of our secular principles by force.

In the case that the street prayers should continue, we would call all the Parisians who can, to be present on  Friday, November 24 in Clichy, at noon, in front of the Mairie, 80, boulevard Jean Jaurès, to show their determination and their refusal to see the laws of the Republic flouted by singing the Marseillaise.

We call, without sectarianism, all parties and associations that share our determination, to prepare to mobilise their activists, against those who take advantage of the weaknesses of our leaders in order to impose sharia in our country.

And before or after the Marseillaise, one could perhaps face the Alla-u-Akbarists with a loud and energetic rendition of something less alien than muslim street prayers to a country who once was called "La Fille Ainée de l'Eglise", and when they spoke of the traditional "Church" in France, they did not mean "Islam"........

See previous posts on the subject of illegal muslim "prayers" in the street:

Paris is reclaiming her streets

Does Macron use Muslims to divide and rule ?

France: Muslim Street Prayers call for the "Killing of Jews"

These illegal Muslim "Prayers in the Street" have blocked Streets and traffic in Clichy (Greater Paris) for 8 months under the eyes of Macron's Police, until Elected Officials - including the Mayor of Clichy demonstrated against this by - in the words of the largely dhimmy French Media - "perturbing" these goings-on and singing the Marseillaise against the lifted derrières of the Mohamedans and the  loud-speaker-broadcasts of Allah-U-Akbar last Friday.

Now, these Law-Breakers are actually taking the Elected French Officials to Court - and as things stand in France (especially with the totally politicised  French Judiciary) - they might actually get away with it. The mind of those who have one boggles..... 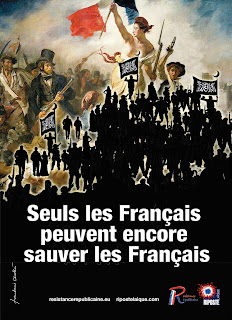